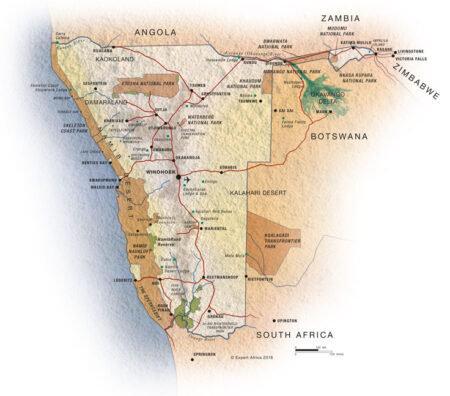 A country of irresistible beauty, Namibia offers sensations of boundless spaces. The great horizons arouse feelings of freedom and a great breath of uncontaminated life. Bordering Angola to the north, Zambia to the north-east, Botswana to the east and South Africa to the south-west, it is a corner of Africa that steals the heart; a trip to Namibia constitutes a sort of search for the origins of the earth and of man. Famous for its contrasting landscapes, it extends for almost 830,000 square km and includes, to the west, the Namib Desert, the oldest in the world, which stretches from north to south along the entire coastline, lapped by the cold waters of the Atlantic Ocean. The Namib Naukluft Park, along the coast between Swakopmund and Luderitz, is the heart of an immense sea of very high sand dunes which, thanks to the wind, are constantly changing and which come to touch the cold ocean, which generates frequent fogs and vital sources. of an indescribable ecosystem. To the south, the Fish River Canyon, the second largest after the Grand Canyon of Arizona, it bears witness with its rocks to the supercontinent Gondwana, one of the primordial lands of our planet. The Central Plateau is covered by vast savannahs with thorny vegetation and barren mountains. To the north-west the Erongo and Damaraland, with their sparse vegetation and mountains of granite and sandstone carved by time and engraved by the hands of the oldest people on earth: the San.
The Etosha park is one of the main boast of Namibia, of great tourist attraction. Considered one of the largest and richest animal parks in Africa, it is characterized by “Pan”, a great saline depression that thousands of years ago it was a salt lake and that nowadays only in the rainy season collects some modest quantities of water. Further north-west is Kaokoland, land of the Himba people, the last to preserve a tribal life and all their rituals and customs. To the east, after the Kavango region, the thin strip called Caprivi Strip suddenly the appearance of Namibia changes. The rivers Kavango and Kwando in fact give a very green vegetation and parks particularly rich in animals including hippos, buffaloes and crocodiles. Ancient and unusual plants, prehistoric rock art, meteorites, parks, culture created by different ethnic groups that populate the country, independent since 21 March 1990, together with unspoiled nature have contributed to making Namibia “The gem of Africa”.

Viability
Road safety, signage, road maintenance, fueling stations, mechanical workshops and lodges are at one of the highest levels in all of Africa. 24-hour assistance is always guaranteed, through direct contacts with your car rental and our office.

Climate
Typical of semi-desert areas, with heat during the day and cool during the night. The seasons are reversed compared to ours: from October to March is the hot season, with temperatures sometimes fluctuating around 40 ° C; in winter, from April to September, temperatures are characterized by a considerable temperature range, ranging from 22 ° -25 ° C in the central hours of the day to 0 ° C at night. The rainy season occurs during the South African summer (January-March), but often short and sporadic rains fall in the months of October-November.

Time zone
When daylight saving time is in force in Italy, in Namibia it is the same time as in Italy. From October to the end of March, solar time, there is an extra hour.

Currency
The currency in force is the Namibian DOLLAR (NAD) whose exchange ratio is aligned with the South African RAND, the EURO / RAND exchange ratio can be seen at the following address: Yahoo Finaza Currency converter (https://it.finance .yahoo.com /). In Italy it is not possible to buy the NAD (Namibian Dollar), but in all the main Namibian towns and at the airport there are branches and exchange offices. Major credit cards are generally accepted.

Language
The official language is English, but Afrikans and German are widespread. Most of the population of color and different ethnicity speak their dialect: the main ones are Bantu and Khoisan.

Religion
The most widespread is the Protestant one; also important Lutheran and Evangelist. Catholics in smaller numbers.

Vaccinations
No vaccination is required; however in Zimbabwe, Botwana and in some northern areas along the border with Angola, Zambia cases of malaria are sometimes found. The choice of prevention is at the discretion of the tourist.

Electric Current
Electricity is 220-250 Volts at 50 cycles per second. The sockets are of the three-pole type and therefore a locally available adapter is required for the European plugs.

Telephone
Almost the whole country is covered by a good network distribution, even for mobile phones. The international country code is 00264.

Flights and Visa
Direct flights from Europe to Windhoek: with Air Namibia, Condor, Eurowing from Frankfurt and with KLM from Amsterdam. Other airlines (SWA, LUFTHANSA, BRITHISH, AIRFRANCE, EMIRATE, ETHIOPIAN, QATAR) have an arrival service in Windhoek with a stopover in Johannesburg. No entry visa is required for citizens of the European Community. The visa will be issued at the airport upon your arrival with the presentation of the passport, which must be valid for at least 6 months from the date of entry.

Economy
The economy remains mainly in the hands of the white population which is 6% of the inhabitants of this country. Due to the scarcity of rain, agriculture is not very widespread, while cattle, sheep and goat breeding is developed with a good export of meat. Fishing is also active and the various industries of conservation and freezing of fish products. The country’s greatest riches are diamonds, mineral products such as uranium, copper and zinc and, in recent years, tourism.